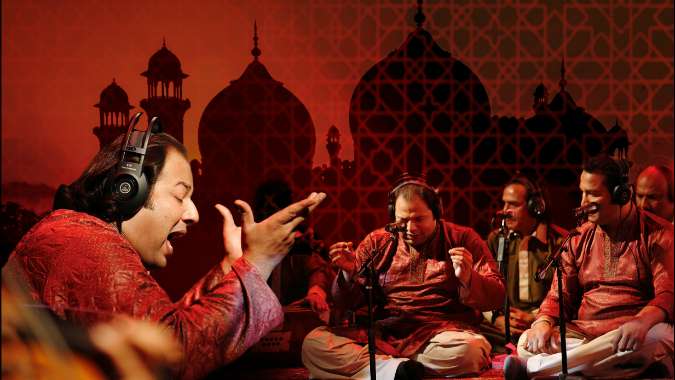 Torchbearers of the Qawwali tradition, the Rizwan-Muazzam group from Pakistan will bring their stunning interpretation of classic Sufi texts to the UK in March 2017, on a national tour managed and produced by Asian Arts Agency.

Tour dates (more to be announced) – for tickets, click on venue:

Rizwan and Muazzam have been performing together since the 1990s. Their incredible performances at festivals around the world, including WOMAD UK, are rare and transcendent experiences and have seen them develop a devoted worldwide following. Performing songs that use hypnotic vocal repetition to induce a state of ecstasy, the brothers’ soaring voices are backed by a gharana, an ensemble of harmonium and tabla accompanied by rhythmic handclaps.

When legendary Pakistani qawwali maestro Ustad Nusrat Fateh Ali Khan, popularly known as “Shahenshah-e-Qawwali”, died in 1997, his family’s six-century musical tradition did not end. The legacy of qawwali, a form of devotional music popular in South Asia, was passed to his nephews, Rizwan and Muazzam, exceptional singers who carry on the Sufi tradition of musical devotion and exaltation.

2017 will mark the 20th anniversary of Ustad Nusrat Fateh Ali Khan’s death. The Rizwan-Muazzam UK tour seeks to remember and pay tribute to the ‘Shahenshah-e-Qawwali’ – king of kings – by bringing his nephews, who are the living legacy of his music, to audiences around the UK, as part of the 70th anniversary of the formation of Pakistan and the Independence of India.

“We are delighted to be bringing Rizwan and Muazzam to UK audiences in 2017, as part of our touring programme. Rizwan and Muazzam are arguably the finest sufi musicians in the world and we are sure that audiences in the UK will have a great time enjoying their incredible live performances. The Agency is one of the leading touring producers of contemporary Asian music in the UK and this tour further strengthens our expanding touring work.”

“We are all really very excited about our UK Tour next year and looking forward to meeting and performing in front of our fans and qawwali loving audiences. We will be following in the footsteps of our great Uncle and Ustad Nusrat Fateh Ali Khan, he loved performing and meeting his fans in the UK and we will be paying our humble respects to him with a very special show for qawwali fans in the 20th anniversary year since his passing.”

Tickets for all dates in the tour will go on sale soon.