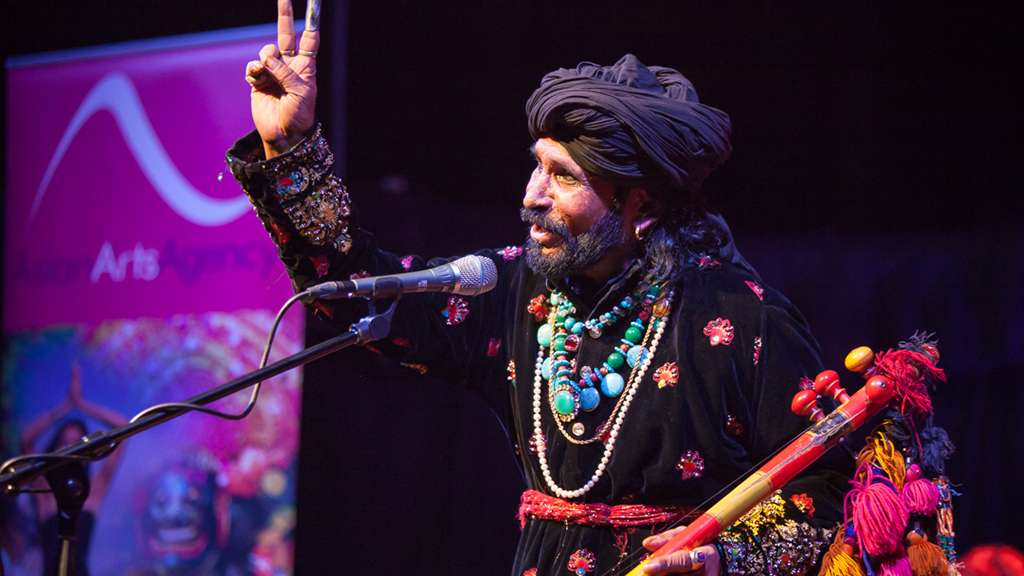 Earlier this Autumn, Asian Arts Agency brought Sufi maestro Sain Zahoor over from Pakistan on a tour of the UK, spanning an array of seven cities up and down the country. His busy tour produced a number of sold-out dates and was hosted by venues of varying sizes, from the grand Symphony Hall in Birmingham to the intimate Burnley Arts Centre.

This tour was a huge success for us, with enraptured audiences and a lot of press attention, and we were delighted with the country’s response to this truly special musician.

Despite spending most of his life as a street musician playing in temples and shrines across Pakistan, Sain seemed perfectly at home on the stage when he graced the UK shores this autumn, spinning around while adorned in elaborate robes and colourful tassels. Audiences around the country sang, clapped, and danced along to his unique style of Sufi music.

The tour kicked off in late September at The Barbican in London, where Sain played alongside Qawwali singer Faiz Ali Faiz to an audience of almost 2000 people. He then moved on to a dancing sold-out crowd at Bristol’s Colston Hall, and to packed audiences in Birmingham and Leeds.

He continued his journey around the country with another sold-out show in Burnley, and then played to over 1000 people in Bradford as part of the Saif Ul Maluk festival, before finishing off at the Lakeside Arts centre in Nottingham.

His audiences had plenty to say about his spiritual presence:

‘I enjoyed it so much I was moved to tears’

‘Surreal, amazing, words cannot describe how spiritually healing it was’

Watch our video highlights of Sain Zahoor’s fantastic tour below:

APPLICATION STATUS: CLOSED We are aware that, due to the pandemic, learning opportunities for children…