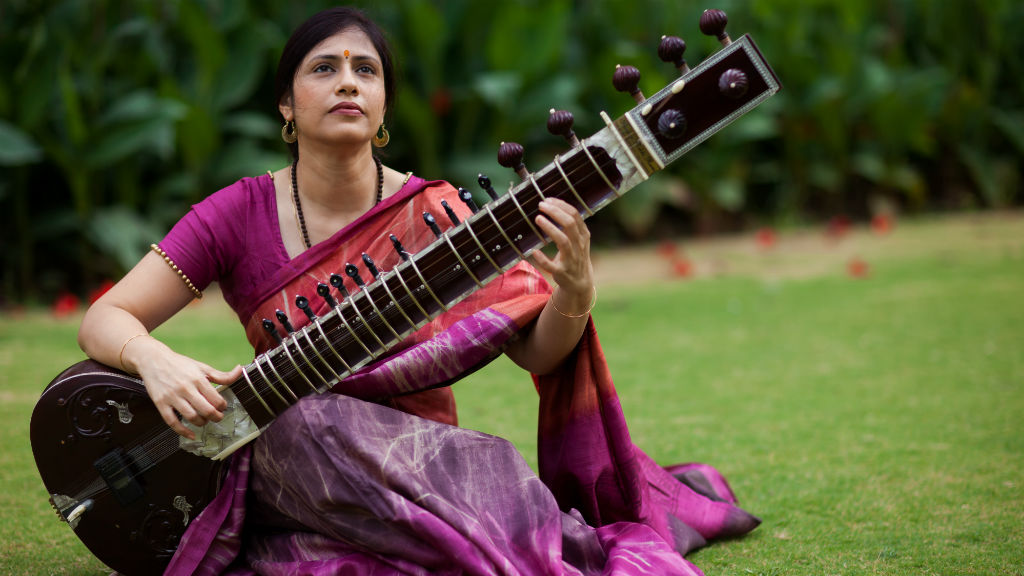 We have selected a few Indian Classical Raag performances by our upcoming artists, Anupama Bhagwat and Gurdain Rayatt.

We are delighted to be presenting Anupama and Gurdain together in concert at St George’s Bristol (8 Sep) and Glastonbury Town Hall (9 Sep).

Known as Surmani, ANUPAMA BHAGWAT is a musical jewel in the world of Indian Classical music. One of the leading female sitar players from India, Anupama hails from the Imdadkhani Gharana lineage (the North Indian school of sitar and surbahar music). The sitarist received her tutelage from the Doyen of the lineage itself, Acharya Bimalendu Mukherjee.

GURDAIN RAYATT is a tremendously gifted tabla player hailing from three different major tabla lineages. Trained both in India and the UK his teachers include iconic Ustad Zakir Hussain.

A poignant and picturesque performance! Filmed at 7am, watch Anupama’s performance of Raag Bhairav, the morning raag. This Indian classical raag is one of the few that can be played during any season. The mood of this raag encompasses meditation, devotion and emotional depth.

Anupama plays Raag Latangi, a Carnatic raag brimming with beautiful intensity. On Guru Purnima, Anupama performed this raag  in dedication to her guru, Acharya Bimalendu Mukherjee. Guru Purnima is the annual sacred day dedicated to a persons guru.  Anupama states at the beginning of the video that she chose this raag as it carries fond memories of her guru.

Raag Rageshree is a night time raag and performed between 9pm and midnight. Also known as the Queen of Raags, the mood of this raag is romantic. In this performance, Gurdain accompanies Debasmita Bhattacharya, the rising star of sarod.

Filmed at the home of Anoushka Shankar, Gurdain Rayatt provides tabla accompaniment whilst Anoushka Shankar performs on sitar.  The appropriate time to perform raag Manj Khamaj is late evening. The legendary sarod maestro Baba Allaudin Khan who was a teacher of Ravi Shankar is the composer of Raag Manj Khamaj.

Traditionally played at night, 9pm until midnight, Raag Jhinjhoti is light and playful. This raag is popular during wedding rituals and classical instrumentalist music.

Raag Jhinjhoti sparked inspiration in the heart of Indian vocalist Bhimsen Joshi. It was after hearing this raag that Bhimsen Joshi felt inspired to become a musician. An icon known for singing in the style of Khayal Gayaki, and also for his popular renditions of devotional songs, he received the Bharat Ratna, India’s highest civilian honour, in 2009.

A short clip, yet the beauty of the Sitar and Tabla clearly shines. This event was India’s Sangeet Piyasi that took place in Kolkata, 2014. Sangeet Piyasi was formed in 1992 and is dedicated to the cause of Hindustani Classical music. This organisation arranges musical concerts, seminars, workshops and regular training programmes to promote and propagate the rich cultural heritage of Indian classical music.