We produced and managed a USA tour with British Asian sitarist Roopa Panesar in September 2017.  The tour began with a full house at the Lincoln Center, New York.

The tour consisted of seven public events as well as workshops.

Who is Roopa Panesar?

Considered one of the finest sitar players on the Indian music scene, UK based Roopa Panesar is emerging as one of the most exciting sitar players in the world. Her outstanding musical ability, along with her soulful and unique style of playing, has left listeners captivated, and has been receiving accolades from audiences and peers alike. 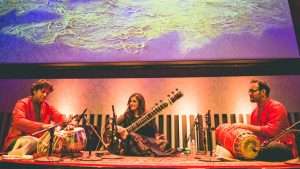