Rising star of sarod, Debasmita Bhattacharya, performed at St George’s in Bristol. She was accompanied by Gurdain Rayatt, one of the finest young tabla players in the UK.

After an exquisite performance, we had the opportunity to go back stage for a quick catch up with the musicians. What was touching was the humility that both these talented artists have. In Debasmita’s words, “It’s a blessing that we are into music. Music has chosen us… It is a different journey. It is something hard, but beautiful”.

Here are some highlights of the interview with Asian Arts Agency’s Aashi Gahlot.

Aashi: How does it feel when you play music? Today’s performance was incredible!

Debasmita: It gives a sense of satisfaction. You feel you are so connected with your soul when you touch music… when music touches you. So, I think for me personally it is always an inner journey and I feel I am in peace right now. Music has such power to change the world in a most beautiful way and that’s definitely peace and love. So, I believe that if me, or we, our music can touch any single soul, then it’s like yes, it’s the blessings of God. For me, during the playing – I don’t know what he (Gurdain) will say, but for me its just like coming into own self, realising own existence through the instrument, through music.

Gurdain: It’s really a mix, a mix of emotions because you’re almost, like Debasmita was saying, you’re kind of on a journey. Sometimes it’s just simply a journey of thought. So you know, before you go on stage, as you go on stage everything is an influence… this stage has had so many maestros perform on it, there’s a certain energy about it – the size of the stage, the lighting, where the audience is, whether they are in darkness or light, how you’re feeling on the day – everything is like this big influence. So, in terms of when it comes to performing, it’s a mix of emotions and it’s different every time. And that really is what dictates what’s going to happen. It’s that mix of what your mind wants to do and what your heart wants to do… I think the more and more you perform it becomes organic and sort of a natural process.

Aashi: If you could add any other instrumental super talent to the one you already have, what would it be?

Debasmita: What a beautiful question! For now I would have to say piano! As soon as I came into this room – I started doing some notes on it and Gurdain said wow! But I knew I was not able to play! But there are a few other instruments… If I got another chance, in my next birth maybe! But I think sarod has taken everything of me – my life, my soul, my love – everything! So… there are plenty of good instruments I would like to play! I love violin a lot! Sarangi… the good thing is when a woman plays something- maybe it’s because we have this soft corner, I don’t know… I think it’s very inspiring when you see. In my generation there are so many musicians and women are there. Even before me there was Sharan Rani and all these maestros, so they are the inspiration. I believe that as much as woman can come forward and play instruments, not only vocal then that’s a good thing. So that’s a message for everyone – we all can do that!

Aashi: And you’re a real model as not many women play the sarod!

Debasmita: Role model is definitely a big word! I don’t think I deserve this word! But yes, it’s a process and I hope that many of us will be in this line and will go together – men and women…

That we will go forward together and work together (Debasmita adds in Hindi). 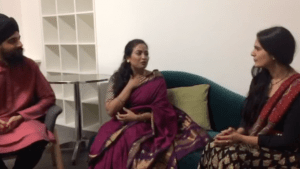 Gurdain: To be honest I’ve never really thought of a specific instrument because once you learn one instrument, even if you might not enjoy others, you appreciate the art form. At least you appreciate the skill. So with guitarists I appreciate the skill that they have. Sarod players, sitar players… you wonder as a non-instrumentalist how is this possible? On the sarod how can they slide without any frets and be perfectly on point with such speed? And that sort of thing. But probably I would have chosen a similar instrument. The piano is a very transformative instrument. You sit in one place but musically you can completely transport mood wise into so many different zones, so many different styles – so the piano. And definitely the skill associated with it. But sarangi otherwise because of the sweetness of the instrument…

Debasmita: I think so many – the flute, it belongs to Krishna. The flute is one of the instruments connected with the soul. As we know, Hariprasad Chaurasia… We are so blessed we are even born in this generation so that we can listen to such legends! And of course, tabla! I sometimes feel like I am nothing without tabla, without Gurdain on stage. Because it is a joint work. We go together, we work together. It is a beautiful journey. I think I would like to… tabla is an instrument we should learn for betterment of taal and rhythm.

Aashi: What’s your dream location to play a concert?

Debasmita: One of my dream locations or place has always been playing with Darbar Festival in London. I am really, really blessed. I have so much to thank to many people and one of them is definitely Sandeep Virdhi, the Director and Founder of Darbar Festival. Who has been doing this noble work for years. As maestros have come to perform, also we the newcomers and students have started our journey. He is very inspiring. So one dream location – we will definitely perform on 10th of November at Sadler’s Wells. That is going to be a dream come true for me. Another one … I want to play at Sydney Opera. I don’t know how or when it’s going to happen! …