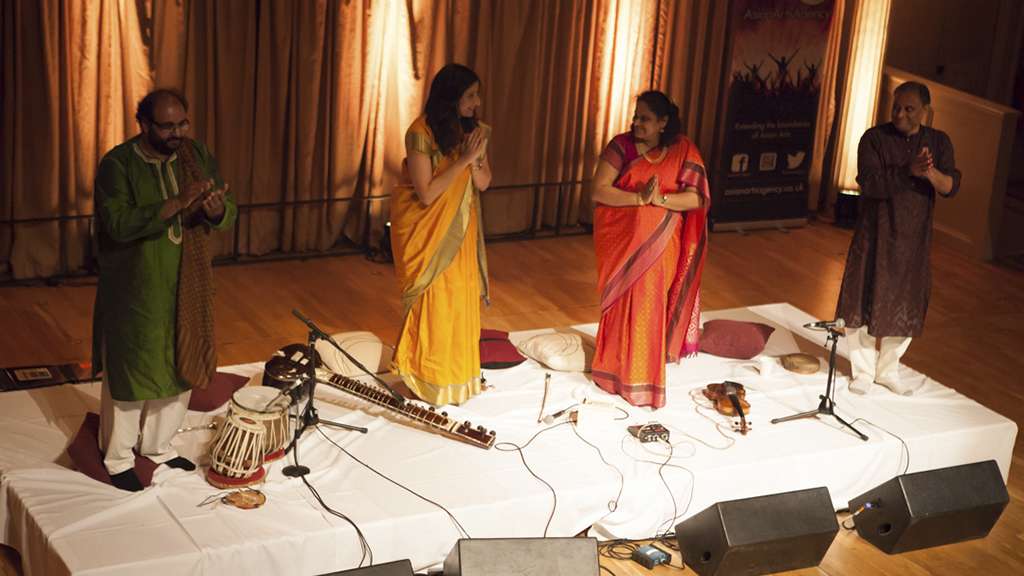 On March 18th 2016 we brought two Classical Indian Contemporaries to St George’s concert hall in Bristol: Roopa Panesar and Jytosna Srikanth. It was a very special night, with audiences raving about the beautiful music and fascinating performances from both Roopa and Jyotsna.

Roopa and Jyotsna approach Indian Classical Music in very different ways; Roopa Panesar follows the North Indian tradition on sitar, while Jyotsna Srikanth plays South Indian Carnatic style on her violin. Before the show, the two met up in a brief Q&A with the audience, discussing how these different influences play out in a fascinating conversation. They also discussed the ways they can collaborate: both with each other, and with other styles of music. Roopa Panesar has played sitar with a wide range of other performers, including Talvin Singh during our Bombay Talkies project, while Jyotsna Srikanth’s new project is with the Bollywood Brass Band.

One audience member asked if she would ever consider collaborating with a Western pop musician. “Yes,” Jyotsna said immediately, “I’m waiting for Adele to call.”

The show itself was a breathtaking experience, with Jyotsna taking the audience through a range of different pieces and concepts, and Roopa Panesar playing beautiful ragas on her sitar. At the end, as explained in their earlier Q&A, the two joined in song along with both their percussionists to play a jugalbandi: a set together at the end of the show, sitar and Carnatic violin working together to create a moving finale.

“Superlative… sublime… It was very good!”

It was a very special night. Check out the videos below: